The Fall of the Berlin Wall changed everything

This November will mark thirty years since the Berlin Wall was dramatically torn down with bare hands, hammers and mechanical diggers. It was a pivotal moment for Europe.

The destruction of the wall in 1989, for which tens of thousands had prayed, not only brought the divided German people together; it opened the way for Christians to openly share the gospel in countries across Eastern Europe, where evangelism and most church activity had been suppressed. 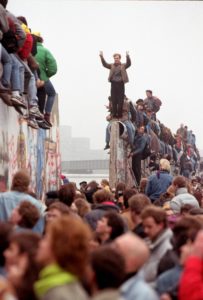 Dave Foster, founder of Eurovangelism/TEN, reflects back on that time.

“Supporting the work of nationals in Eastern Europe was a clandestine affair for the first few decades of this ministry. But the fall of the Berlin Wall changed everything! It marked the beginning of opportunities to get alongside our partners in these countries, to openly build on the foundations that had been laid under the restrictive regimes of Communism.”

By 1990, Germany was unified and Communism collapsed across Europe. In the following year, Christmas and Easter holiday dates were restored to the calendars of all former Communist countries. Albania, which had declared itself the first atheistic state, allowed humanitarian aid to enter and the first Albanian Children’s Bible was freely distributed. In a Siberian prison camp, Dave Foster and Gary Cox shared communion and witnessed a baptism service. Thousands of food parcels were shipped from the UK to people in desperate need and this ministry of compassion, aided by TEN’s partners, resulted in the annual Harvest for the Hungry appeal.

Today, we are blessed to freely visit any of the nations of Europe. The open door into Europe presents the greatest scope to share our faith. Find out how you can visit Eastern Europe