“Connected in Mission” was the theme of a special conference hosted in Bristol on Saturday 11th May and organised by TEN. Speakers from Eastern Europe were invited to address more than 100 delegates, included local church leaders, long-term supporters and other Christians with an interest in what God is doing in Europe. See the conference photos 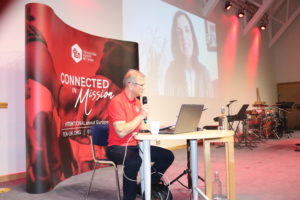 Following a keynote address by the outgoing CEO, Gerry Partridge a schedule of speakers from Eastern Europe was interspersed by videos and live-streams with more of TEN’s partners. Serghei Mihailov, Executive Director of Beginning of Life in Moldova spoke of the severe challenges faced by his small nation and about the impact being made by Christians. Long-standing partners, Danny and Vera Kuranji, from Serbia spoke about the growth of the church from just a living room full to a congregation of 250 believers in Novi Sad, Serbia and of the ministry to drug addicts resulting in changed lives. Hervin Fushekati, leader of the Church of God group of churches in Albania and founder of the International School of Theology and Leadership shared his dramatic turnaround as a young Muslim eager to challenge Christians about their faith. The church is growing rapidly in Albania, following the atheistic crackdown under Communism in the previous generation.

Live links were made with Vesna Radeka, President of the pro-life organisation, Choose Life. Vesna was followed by Vladimir Cizmanski in Montenegro who spoke about the plans to build the country’s first-ever evangelical church building. The other handful of churches use rented properties and homes of believers. Finally, delegates watched the interview with Bulgarian pastors, Nikola and Daniela Atanasovi who are reaching out to Roma people in Plovdiv. 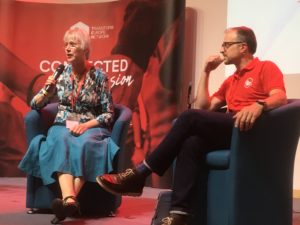 Chair of Trustees, Hazel Vinson spoke of the immense gratitude towards Gerry Partridge as he enters a well-deserved retirement at the end of May 2019 and welcomed TEN’s new CEO, James Vaughton, who officially takes up full responsibility on 1st June. Also thanked was the hospitality team at St Michael’s church in Stoke Gifford who accommodated the conference.